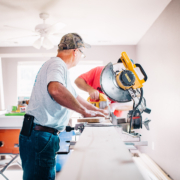 Have you performed recent home renovations? You should update your insurance broker to ensure that you have adequate home coverage.

Contrary to what many of us thought would have happened during the course of a global pandemic, chances are, a run on home renovations would NOT have been on the list!

But, lo and behold, as we all hunkered down at home, the state of our homes came under far more scrutiny. Not to mention, our need to create spaces in our houses that could better accommodate the increased demand for work, school, and everything else under a single roof.

As of spring, 2021, 1 in 2 Canadians either made major home renovations or were making plans to do so. 1 in 4 had already completed at least some upgrades. And, of those who renovated, over 14% of them claimed it was on impulse. That’s a lot of sudden upgrades to many homes. The question is, did these impulse home renovators update their home policies with their material changes?

Have you done recent home renovations? Have you updated your homeowner’s policy to reflect the changes?

The cost of your home renovations matter

To maintain coverage provisions, policies identify that you to tell your broker if you spend $5000 or more. For those home improvements that were done rather quickly, it wasn’t unusual for homeowners to not check their policies before launching the work.

Changes such as finishing a basement or building an addition can change the rebuild value of your home and, as a result, impact your insurance coverage. Across Canada, 13% of home renovations ranged from $5,000-$10,000, 6% cost between $10,000–$20,000, and 7% exceeded $20,000. Approximately 26% of home improvements in Canada cost $5,000 or more, meeting the bar for updating a homeowner’s policy. And, an interesting fact, remote workers working from home spent an average of $1,000 more on their home renovations.

The question is how many of these Canadian homeowners claimed them with their insurance brokers.

Keep your insurance broker in the home improvement loop!

The exact data on whether homeowners updated their home insurance policies isn’t yet confirmed, but if the numbers from a decade ago are any indication, chances are, no. In 2013 only 6% of British Columbians said they’d reviewed their homeowner’s policies before they began their renovations. The same number of Ontario homeowners and only 5% of Albertans preemptively checked into their insurance.

Respectively, only 17%, 14% and 13% of homeowners in those provinces followed up with their insurance providers after they completed the work on their homes.

Among the homeowners who made improvements to their homes in 2021, over half added to or enhanced their backyards, 29% added to their home offices, 23% improved their basements with an entertainment area, 12% added new playrooms, and 3% built additions.

Do you have other questions about recent or upcoming home improvements and what they mean to your home insurance? Talk to us – we’ll tell you everything you need to know!